Trump: 25 Years Ago In PLAYBOY

The one on the right is Donald Trump, who was already  trying to make America great on the cover of a March 1990 PLAYBOY. He sat for a interview in which he revealed the full self-satisfied  human catastrophe that is the blustering 2015 version:. 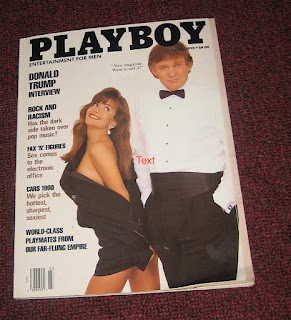 On presidential ambition?  “I don’t want the presidency.  But if I ever ran for office, I’d do better as a Democrat than  as  a  Republican – and that’s not because I’d be more liberal, I’m conservative.  But the working guy would elect me. He likes me.   When I walk  down the street those cabbies start yelling out their windows.”

On foreign policy:   He wouldn’t trust anyone, allies or enemies.  For him as a super hawk the only things that works is “extreme military strength”.

On flaunting wealth:  ”A display is a good thing.  It shows people you can be successful. It can show you a way of life.”

Throughout the interview,a remarkable insight into  the earlier man,  his ego is never restrained, because as he puts it: “Every successful person has a large ego.”

And now, 25 year later, he in fact wants to be your president. But first you should make an effort to read the entire interview. Poke around online and you may find it.