Did you see that President Obama’s renaming of Mt. McKinley up in Alaska was called  a “political stunt” ?  You could find “stunt” in big letters on the Beacon Journal’s front page, courtesy of an “irritated” former Rep. Ralph Regula, 90,  a Republican from Navarre who has fought the name-change idea well before Obama  entered office.

It figured.  Obama’s opponents have found him to be a convenient lightning rod for anything that goes wrong in our daily lives, from rain delays in baseball games to pie crust that sticks to the pan.  In this instance, however, the president’s co-conspirator is Alaska Sen. Lisa Murkowski, a  Republican who introduced legislation  in January to change the name to Mt. Denali.  (Her name never appeared in either BJ  story this morning.) She had this to say about Obama’s “stunt”: 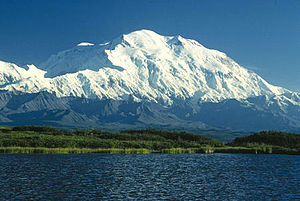 “For generations Alaskans have known this majestic mountain  as ‘the great one’.   I’d like to thank the president for working with us to achieve this significant change to show  honor, respect and gratitude  to the Athabascan people of Alaska.”

In the two long BJ articles, however, I did read of how other Buckeye Republicans wailed at Obama’s action to placate those constituents who might want to pile on. .  Rep.  Bob Gibbs, of Lakeville, called it an “insult to all Ohioans” .  Rep. Jim Renacci, of Wadsworth, said Obama was guilty of diminishing the nation’s “values”  – as if the GOP controlled Congress hadn’t already done so.  Sen.Rob Portman a Cincinnatian who tagged along for the ride, wasn’t very happy either.  Nor was Gov. John Kasich.

Unsurprisingly, some of the strongest complaints came from McKinley’s adopted hometown of Canton, a name which has Chinese roots thanks to a surveyor named Bezaleel Wells in the early 1800s.  Canton is the traditional name of Guangzhou,  China. But we can’t  imagine any Ohio city named  Guangzhou. The mountain was later tagged  for McKinley.

I have a solution to mollify the outraged  governor.  Why not name one of those  Indian mounds in Ohio after the governor.  Mound Kasich?

That’s not a typo.