As the newly minted version of the Party of Lincoln – otherwise known as CPAC (Crazy Party of Anarchy Central)  – broke camp to create more havoc across the land, it left us with hastily penned  notes of the awful political year still ahead. One after another, the  group’s elite corps of life-forms paraded before the audience with moronic bombast to set America on a path of righteousness, belligerence and  wildfire insanity.

At one point, I began to wonder why  none of their smarties had thought to provide an apse behind their mikes  to stage their remarks with greater sanctity. 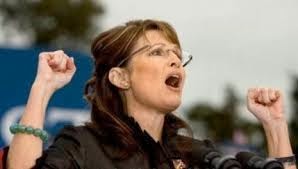 Despite the heavy competition, Sarah Palin once again triumphed with chilling evidence of madness, sort of like Donizetti’s Lucia di Lammermoor who descended the staircase completely into another world.  How could anyone surpass Sarah’s tasteless takeoff on the NRA’s Wayne LaPierre’s gun-slinging by declaring:  “The only thing that stops a bad guy with nukes is a good guy with nukes.”

Can you imagine her as the vice president toying with the nuclear trigger? Can you?

Somewhere along her line to stardom, she decided that an adolescent delivery of her message, cranking out lumpy satire with rolling eyes, would  disguise the fact that she had nothing useful to say.  But this time, she did accomplish something: She rightfully earned the Grumpy Abe Linguistic Lunacy (GALL) Award.