JobsOhio: We are barely better than nothing at all

JobsOhio released its third quarter report on November 2.  It got virtually no media coverage because, like the last reports, it’s high on pro-Kasich propaganda and short on the kind of details necessary for any outside party to really understand what, if anything, JobsOhio is doing.  Sure, it generally lists some of the companies JobsOhio has benefited, but it omits any information about what the state is providing to these companies.

Without that information, it’s impossible to calculate the Return on Investment (ROI) to determine the efficiency and effectiveness of the JobsOhio’s investment strategy – something that a VC fund manager like Mark Kvamme would never be able to get away with in the private sector.   This leads us to believe that the ROI probably isn’t that good.

It seems maybe Mark Kvamme knew the truth behind the numbers and he just threw up his hands and gave up,  leaving JobsOhio to start his own private venture capital firm to serve the precise role in the economy that Kvamme promised JobsOhio would play.

Kasich is over half way through his term and his flagship program is paralyzed by legal questions, stuck without anticipated funding, and it has lost its chief advocate and visionary.  This while Diebold, one of the controversial pre-JobsOhio deals that the Administration used to cite as a top example of its economic success stories, collapsed after a year because the company was already in non-compliance with the State’s mandate that Diebold could only keep the money as long as it didn’t reduce its Ohio workforce by more than 20%.

And keep in mind, Kasich promised JobsOhio’s main function was to be like “Rhodes Raiders”- an economic team that would attract out-of-state business to relocate to Ohio.  So, how’s it doing on that front, according to JobsOhio?

You suck at the speed of business, JobsOhio…

We’ll save you the math.  Keep in mind, these are just pledged job “commitments” by the recipients of JobsOhio’s financial assistance, and experience has taught us (Diebold) that companies often fail to deliver on their commitment as promised.  Nonetheless, it works out that only 20%  of the job commitments JobsOhio has gotten this past quarter comes from companies moving into the State.  The rest is the State simply underwriting the costs of businesses already in Ohio to expand.  With that kind of record, JobsOhio makes JaMarcus Russell look like an offensive Raider powerhouse in comparison. 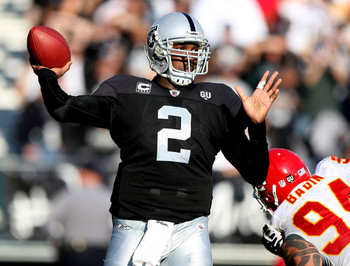 $5 says Kvamme had this guy in his fantasy league at some point.

But to put these “new job” commitments in proper perspective, let’s take a look at what JobsOhio says this most recent quarter compares to a year ago:

Keep in mind this is an interesting comparison beyond just a year ago.  In Q3 2011, Ohio’s economic development efforts were still under the Ohio Department of Development, a public agency.  JobsOhio was still in process of being set up… slowly.

So this is JobsOhio comparing how it’s done its third quarter “fully operational” to the Ohio Department of Development’s second to last quarter of winding down.  Yes, it shows JobsOhio has 23% more projects than the same period a year prior.  Keep in mind that as confidence in the economic recovery builds, demand for business expansion naturally increases, so we don’t know how much of this increase is the result of JobsOhio’s efforts or simply the natural result of an economic recovery.

But look where those increases come from.  If you do the math, you see that the number of total jobs committed is up 30% from the same quarter a year ago, but commitments for new jobs is only up by less than 9%.  Therefore, most of the increase is in simply commitments to keep existing jobs.

In other words, a vast majority of JobsOhio’s activities appear to be in subsidizing existing companies already in Ohio the cost of existing jobs, instead of a) luring out of state companies to Ohio or b) creating new jobs at all.  And of the few new jobs it is creating, 80% of them are being created by companies already in Ohio.  And there’s still the unanswered question as to whether these new jobs would have been created or retained without JobsOhio’s financial assistance.  But we know that this Administration has thrown money to other Ohio companies to retain jobs that were not in jeopardy (see: Marathon and Wendy’s.)

According to JobsOhio’s own report, 74% of what it did this quarter was to fund companies for jobs that already existed in Ohio… without state assistance.

A 9% increase in possible new job commitments would be great if they did it at half the cost of previous programs.  But since JobsOhio refuses to release those numbers, it doesn’t look that great.  Especially when you consider that the increase could be entitled to simply nothing more than a natural increase for demand of economic development aid as more companies are seeking to expand as confidence in the economic recovery takes root.

How does this help Ohio’s economy?  How is this a wise investment of scarce tax dollars?  How is this nothing more than a political slush fund to curry favor with the Governor’s friends in the business community?  How is this any better than Ohio was doing with the Ohio Department of Development, which even under Kasich focused more on projects that, you know, created new jobs? If you look to the year to date data, it doesn’t get much better.  Over 70% of what JobsOhio says it has done this year has gone to fund existing jobs already in Ohio in the name of “retaining them.”

Ohioans deserve answers, and it’s beyond time for the media to start asking them.