This morning, the Dispatch updated the story we wrote about yesterday when Kasich talked about how failure of Issue 2 would embolden the private unions and somehow card check in Ohio would become law.

That wasn’t the half of it (literally):

Kasich also warned yesterday that if Senate Bill 5 were repealed “don’t be surprised if you see an increase in the (commercial-activities) tax to bail out a pension system.”

“Some of these pension systems are in bad shape,” Kasich said. “It’s not the end of the world, but I’ll tell you it’s a setback. And I’m all in.”

Senate Bill 5 would no longer let governments pick up their employees’ share of pension payments — however, it would not generate more money to help the pension systems’ financial situations. Lawmakers are looking at public-pension solvency separately from Senate Bill 5.

Governor John Kasich wouldn’t raise taxes to pay for the megabazillion deficit he said Ohio had (even though, in reality, the State was running a surplus), and instead slashed funding for local governments and schools instead….  Yet, if labor prevails and defeats Issue 2, Kasich says he will raise taxes on businesses to help labor? 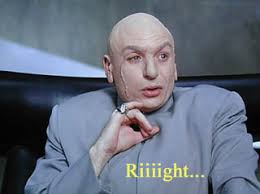 This sounds more like an extortion threat.  As the Dispatch notes, Kasich cannot honestly believe that Issue 2 improves the solvency of the pensions, because there’s nothing in the bill for him to claim that.

We’ve heard rumors that Kasich had a private meeting with business leaders in Cincinnati in which he was essentially shaking down the business community there to donate to Building a Better Ohio and defend Issue 2.  We heard Kasich personally offended some of the business folks.

Kasich tends to repeat what he says.  I’m starting to wonder if Kasich has said this before.  Like in Cincinnati, and in other meetings in which he’s trying to get the business community to support Issue 2.

What I can’t tell is if Kasich is just insulting their intelligence or outright threatening them with retribution if they don’t help him to prevail.  Probably both?

How does this guy keep raising money?!?