Yesterday, Joseph wrote about how the Springfield School District objected to the Department of Administrative Services’ (DAS) “analysis” on how much SB 5’s provisions would supposedly save school districts obscene amounts of money.  In Springfield’s case, the school district estimated that the Administration exaggerated its saving by 784%, which, in most people’s estimation would be “a tad off.”

Today, the Hamilton Pulse-Journal reports that school districts in Warren County, the heart of GOP country, is protesting the DAS analysis as grossly overstating their potential savings as well:

The Ohio Department of Administrative Services report indicates the eight districts and the career center can reduce costs by an estimated $15.9 million, based on the elimination of salary schedules and employees paying 15 percent of their health insurance premiums.

Mason schools’ savings under SB 5, estimated to be $4.5 million by the state, are actually closer to $1.8 million, according to rough estimates by the district.

I guess when you’ve already been off nearly 800%, being off 250% is like hitting the bulls eye, am I right?

Teachers and other employees at the Warren County Career Center and Kings schools already pay 15 percent of their health insurance premiums.

“While the district feels there will be a savings, to use an average that is not defined is not a clear indication and we can’t solidify this number,” said WCCC Treasurer Karen Royer, referring to the estimated $431,000 in savings.

Lebanon and Waynesville schools pay 20 percent or more of their health insurance premiums, a higher share than what SB 5 requires.

And, yet, the Administration still claims SB 5’s health insurance premiums provisions will save these particular districts money.

“The analysis significantly overstates any potential savings to Lebanon City Schools,” said Eric Sotzing, treasurer at Lebanon schools, savings for which were estimated at more than $2 million. “The analysis also fails to take into account the costs associated with implementing a performance-based compensation plan and differences in existing salary schedules.”

“I do know that our funding is going down and there are no computations available to support anything from the recent legislation that would save Wayne Local Schools $532,154,” James said.

And this gets to the one-two political punch the Kasich Administration is attempting to do with this sham of analysis.  They’re trying to make SB 5 more popular by making the present system of collective bargaining appear horrible by trumping up a number to suggest it costs our schools nearly a $1 billion a year (when it doesn’t).  Second, the Administration is motivated to exaggerate the “savings” of SB 5 in order to make the cuts in education Kasich’s budget look more tolerable by inflating beyond all credibility how much SB 5 will offset those cuts.

In other words, the DAS’s analysis is one tube of lipstick for two pigs. 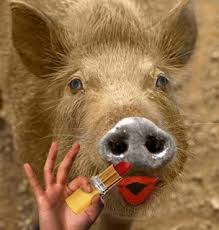 And let’s not gloss over that this isn’t the teachers unions calling these numbers b.s., it’s the management of the school districts!  If anyone had a bias to suggest SB 5 would saving school districts money, it’s them.  After all SB 5 is intended, according to Kasich, to benefit these folks.  And I’d bet the farm that every one of these guys support SB 5, too.  But they can’t just sit on the sidelines and watch this Administration go around the State of Ohio claiming that this bill is going to save over $800 million a year for local schools when they’re own review of the “analysis” shows the real number is a pittance compared to what is being pushed by Kasich.

And what’s the Administration’s response to these school districts saying their “analysis” is deeply flawed?

Translation: In our defense of our district by district breakdown of SB 5 savings, we didn’t actually look at any data from these districts.  Nonetheless, we just wanted to produce something so that the school districts know what kind of savings they have, even if that number is pretty much totally made up.

You’ve got school districts managers in the heart of GOP country up in arms over the Administration’s attempt to swindle people into thinking SB 5 is going to save them millions of dollars that will never occur.   This as many of these districts are potentially planning to go to voters to seek levies to provide the funding for essential school services that the Kasich budget does not provide.

This “analysis” is so fundamentally flawed no media outlet in Ohio should even report on it, even if they just qualify their reporting as a “Kasich Administration claim.”  The DAS document is nothing more than highly misleading, outright false political propaganda that if reported on will mislead and misinform voters as to the reality of SB 5.  That any savings it generates is remarkable small compared to the economic harm it imposes on working and middle class families in Ohio.