DISCLOSURE: I am presently one of the attorneys representing David Krikorian and the Krikorian for Congress Campaign Committee in defense of a defamation lawsuit filed by Congresswoman Jean Schmidt. 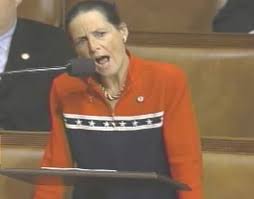 Roll Call breaks the story that the Office of Congressional Ethics is investigating Congresswoman Jean Schmidt and her arrangement with attorneys of Turkish-American organizations who have been providing her with legal services at no charge for a few years now.  Advancements of credit that the Congresswoman has yet to report as a gift or a loan in her annual congressional ethics filings.

Schmidt attorney Bruce Fein declined to answer questions about how he is paid, saying he is responding to a request from the OCE, the board that reviews potential rules violations and recommends investigations to the House Ethics Committee.

“We’ll be making proper responses to an outstanding inquiry,” said Fein, an attorney with the Turkish American Legal Defense Fund and a resident scholar at the Turkish Coalition of America.

In a statement Monday, Schmidt spokesman Brian Pfaff acknowledged the Ohio lawmaker had not received a bill from TALDF for its work to date but said Schmidt had followed House rules.

Schmidt’s office dismissed similar allegations in July, when Krikorian filed his first complaint with the OCE. At that time, Schmidt’s office said the lawmaker had received written advice from the Ethics Committee on her legal arrangement, although the office declined to provide a copy of the letter.

“The committee is aware that the Congresswoman is represented by TALDF and that we will not be billed until a legal expense trust is formally approved and established. At that time, we will receive a bill for all appropriate legal fees and services connected with these cases,” Pfaff said Monday. “As I’m sure you are aware, the Committee does not typically explain its process. We have been assured that we have answered all of the committee’s questions and provided all necessary information and await approval of the trust.”

According to the House Ethics Manual, a Member may accept pro bono legal services under certain circumstances, such as the filing of friend-of-the-court briefs or civil actions challenging the validity of a federal law or regulation.

Members are also allowed to establish legal defense funds, with the permission of the Ethics Committee, for cases related to the Member’s official duties, as well as criminal prosecutions or “a civil matter bearing on the individual’s reputation or fitness for office,” the manual states.

The issue in this investigation is pretty straightforward.  Schmidt’s office seems to be arguing that so long as she eventually planned on paying for legal services by setting up and raising money from a legal expense trust fund at some future point, a Member of Congress can accept the legal services with no intention of paying for such services themselves in the meantime.

I don’t represent Krikorian in prosecuting the ethics case.  But I’ve written about it before (and this was BEFORE I became part of Krikorian’s defense team), and nothing has really changed my opinion.  Even if Schmidt had always intended of getting her attorneys paid eventually by later setting up a legal defense fund, the fact that she accepted such services without paying for them should still have been considered a gift or loan that she should have reported on her ethics disclosure forms.  After all, the services were provided and have a monetary value.  The fact that she might have a plan to eventually pay for them through other means does not eliminate the legal reality that she, at best, was extended credit by these attorneys at a time in which no legal expense fund existed (in fact, to date, no such authorized fund exists.)

Frankly, I don’t see how Schmidt’s theory could possibly fly.  If accepted, couldn’t then any Member of Congress accept free legal services with the defense that it’s fine so long as say they plan to sometime in the future eventually, maybe, get the attorneys paid by a legal expense fund?  And who ordinarily contributes to such funds?  Even more special interest groups?

To add to this intrigue, while Schmidt is represented by attorneys from various Turkish-American organizations in what seems to be more of a proxy fight between Turkish and Armenian interests duking out a foreign policy matter than an actual defamation suit, guess what committee Schmidt was recently appointed to?  You’ve guess it—the House Foreign Relations Committee.

Given that many Republicans believe that it is unavoidable that they may have to just eliminate a Republican congressional district, this is precisely the kind of attention Jean Schmidt doesn’t want.  She could be in, well, deep Schmidt.