USA Today profiled auto dealers who are running for Congress and how the “Cash for Clunkers” program has complicated their campaign.  Unless you just checked out a hotel room or buy your papers at McDonald’s you probably didn’t see the story.  I almost missed it.

Well, we couldn’t have a story like this and obviously not talk about “Cash for Clunkers” author Congresswoman Betty Sutton’s (D-13th) opponent Tom Ganley, could we?

Dealers such as Tom Ganley, running for a House seat in northeastern Ohio, make another argument against the program: It wasn’t all that beneficial. Ganley’s dealerships sold 876 cars through Cash for Clunkers, but sales fell sharply after the effort ended, he said.

“Ultimately, for the year, we didn’t sell any more cars,” said Ganley, who attacks “taxpayer funded bailouts” on his website. “Look at it from a businessman’s standpoint: If I say, ‘No, I’m not doing that,’ that’s horrible for long-term customers.”

Oh, and as for Ganley’s criticism of the program he used to quickly sell nearly 1,000 cars?

Julie Sweet, campaign manager for Ganley’s Democratic opponent, Rep. Betty Sutton, argued that Ganley’s position on the program had changed. She pointed to an August Cleveland Plain Dealer article in which Ganley complained about delays but said Cash for Clunkers had “certainly primed the pump and accelerated auto sales.”

Sutton was the lead sponsor of the House version of the bill.

“Tom Ganley is still trying to sell the voters something,” Sweet said in a statement, “and it’s no longer just a used car.”

So, I couldn’t resist but call Tim up and tell him about this story.  I present to you, dear reader, a production of Plunderbund Theater called “Modern calls Tim about Tom Ganley being a duplicitious asshat”:

Tim:  Did you say USA Today, did you check out of hotel today?

M.E.:  No, I heard about the story on Dailykos.

M.E.:  Yeah, Tom Ganley sold the most cars under the program of any candidate running for Congress.

Tim:  (excited and angry as he gets in his posts):  I tell you what, how in the hell does a guy like Tom Ganley look himself in the mirror…. how can they …. 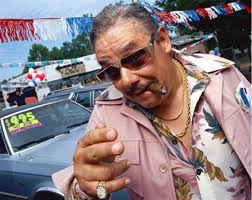 Tom Ganley finally found a product he cannot sell…. his hypocrisy to voters.