An oft-repeated claim of the right is that government regulation of private industry stifles innovation, and it has a certain ring of truthiness to it. But, as with most things truthy, the truth often doesn’t play along.

Sulfur Dioxide pollution has significant externalities – acid rain, which often presents itself far far away from the site of the polluter. In this instance, regulation made this hidden cost effectively a real cost to the polluter – and so they innovated in the field of SO2 emissions reduction to figure out how to avoid the costs associated with SO2 pollution. One commenter compared regulation to a change in natural environment, which will result in industry “evolving” to overcome the new “selection” criteria. That’s actually an astonishingly insightful comparison. The concept of evolutionary economics wasn’t one covered in my one quarter of econ in college. 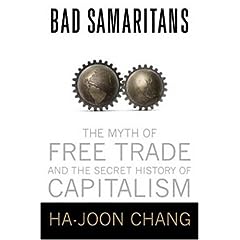 But it seems to make a heck of a lot of sense. It doesn’t take a rocket scientist (or even an economist) to hold classical “free trade” economics up to the real world and notice that the two things don’t exactly work the same. In doing some research about evolutionary economics, I stumbled across this book: Bad Samaritans: The Myth of Free Trade and the Secret History of Capitalism. Unfortunately, it’s not available yet, but the Columbus Public Library has copies on the way. I’m #3 on the waitlist. It’ll be interesting to see what the book has to say about this topic.

Who’s REALLY To Blame For The Missed Rolls-Royce Opportunity? What Would Jesus Buy?