One night in mid-April, the steel door clanked shut on detainee No. 200343 at Camp Cropper, the United States military?s maximum-security detention site in Baghdad. 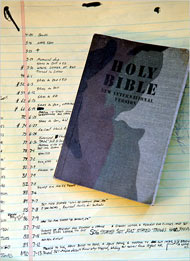 Notes he kept during his detention in a maximum security American military prison in Baghdad, and the Bible he kept, in which he wrote some of the notes.

American guards arrived at the man?s cell periodically over the next several days, shackled his hands and feet, blindfolded him and took him to a padded room for interrogation, the detainee said. After an hour or two, he was returned to his cell, fatigued but unable to sleep.

The fluorescent lights in his cell were never turned off, he said. At most hours, heavy metal or country music blared in the corridor. He said he was rousted at random times without explanation and made to stand in his cell. Even lying down, he said, he was kept from covering his face to block out the light, noise and cold. And when he was released after 97 days he was exhausted, depressed and scared.

Detainee 200343 was among thousands of people who have been held and released by the American military in Iraq, and his account of his ordeal has provided one of the few detailed views of the Pentagon?s detention operations since the abuse scandals at Abu Ghraib. Yet in many respects his case is unusual.

The detainee was Donald Vance, a 29-year-old Navy veteran from Chicago who went to Iraq as a security contractor. He wound up as a whistle-blower, passing information to the F.B.I. about suspicious activities at the Iraqi security firm where he worked, including what he said was possible illegal weapons trading.

But when American soldiers raided the company at his urging, Mr. Vance and another American who worked there were detained as suspects by the military, which was unaware that Mr. Vance was an informer, according to officials and military documents.

It took THREE MONTHS for an innocent American – the guy who tipped the government to the situation that erroneously landed him in detention in the first place – to be released from a military detention camp in Iraq. Three months. How long does it take an innocent who doesn’t have prior beneficial contact with the FBI? What if the innocent is Iraqi? Is anyone actually naive enough to think this is the only time it’s happened?

Who is your ideal candidate? I believe in Christmas (or: Why the War on Christmas doesn’t exist)